Mira Schor (b. 1950, New York, NY) grew up in an artistic environment surrounded by the works of her mother and father. Her professional career ranges from artistic creation in various media such as drawing and painting, to teaching, criticism and research on feminism and contemporary culture. She studied Art History at New York University (BA) in 1970 and then moved to California to study a Master of Fine Arts at the California Institute of the Arts (1973). From this stage on, Schor’s career presents a complementary duality that she will develop over the next few years: painter – writer, public – private, shy – extroverted.

Influenced by her personal experience, she made works in ink on paper composed of various indecipherable texts, approaching a politics of the body based on fragile and transparent materials that plays around the understanding or work´s message. After working for about ten years with these mediums, Schor gradually approached oil. In the 1980s she made a series of large-scale works on the notion of the public and the private; and during the 90’s her critical work is connected with the theory of feminism. At this time her paintings acquire iconographic connotation about masculinity, feminism, power and denials. In more recent figurative works, Schor takes up themes about freedom, autonomy vs. the social practice of art, collectivity and the abstinence of discourse.

One of her most prominent publications is Wet: On Painting , Feminism, and Art Culture (1997). She was elected to the National Academy of Design in 2017 and received the 2019 Lifetime Achievement Award from the Women’s Caucus for the Arts. Her work has been exhibited in important museums such as The Jewish Museum, Hammer Museum, MoMA PS1, among others; and are in permanent collections at prominent institutions such as: Carnegie Museum of Art, Pittsburgh, US; Pennsylvania Academy of the Fine Arts, Philadelphia, US; Minneapolis Museum of Art, Minneapolis, MN; Portland Art Museum, Portland, US; and University of Kentucky Art Museum, Lexington, US. 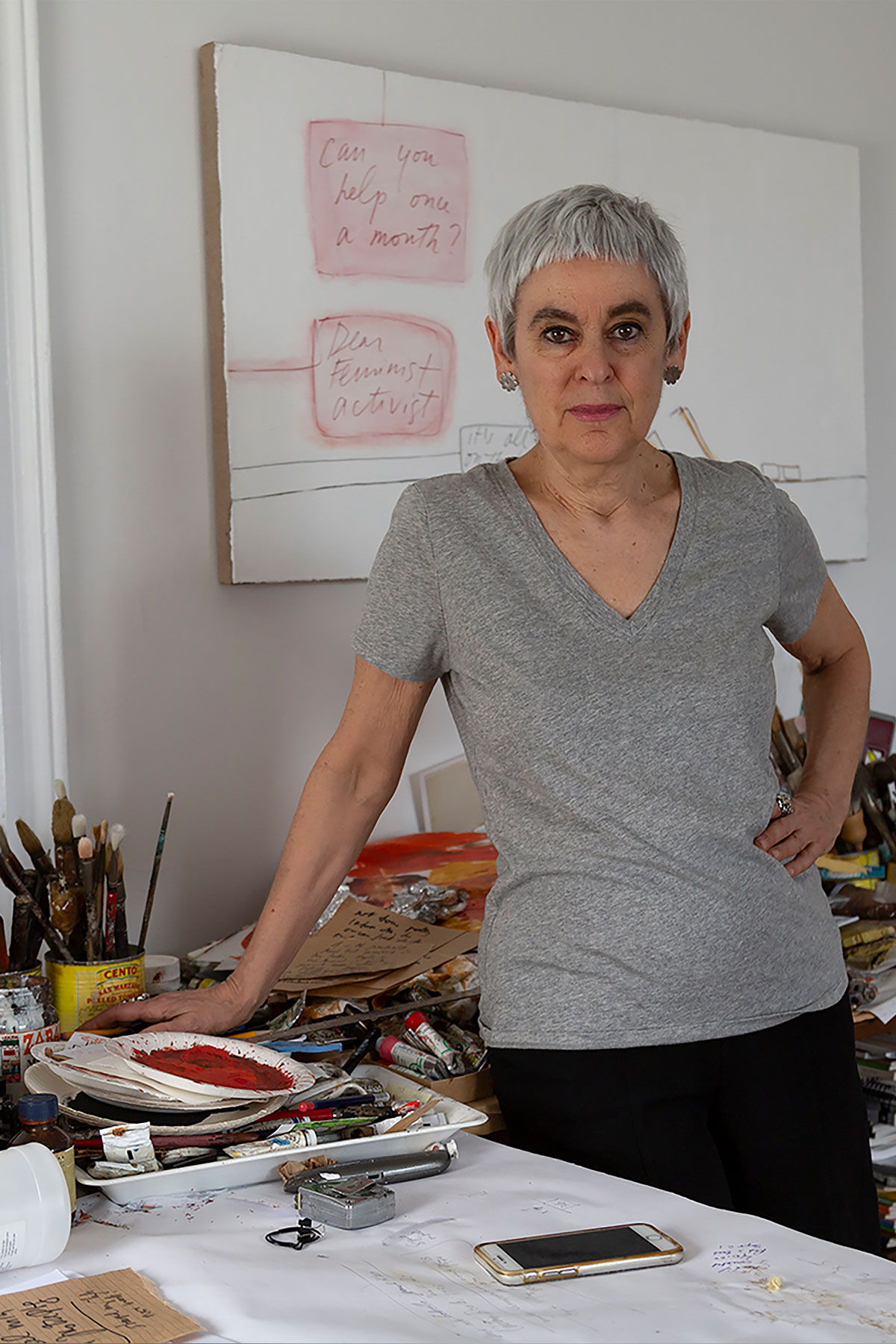 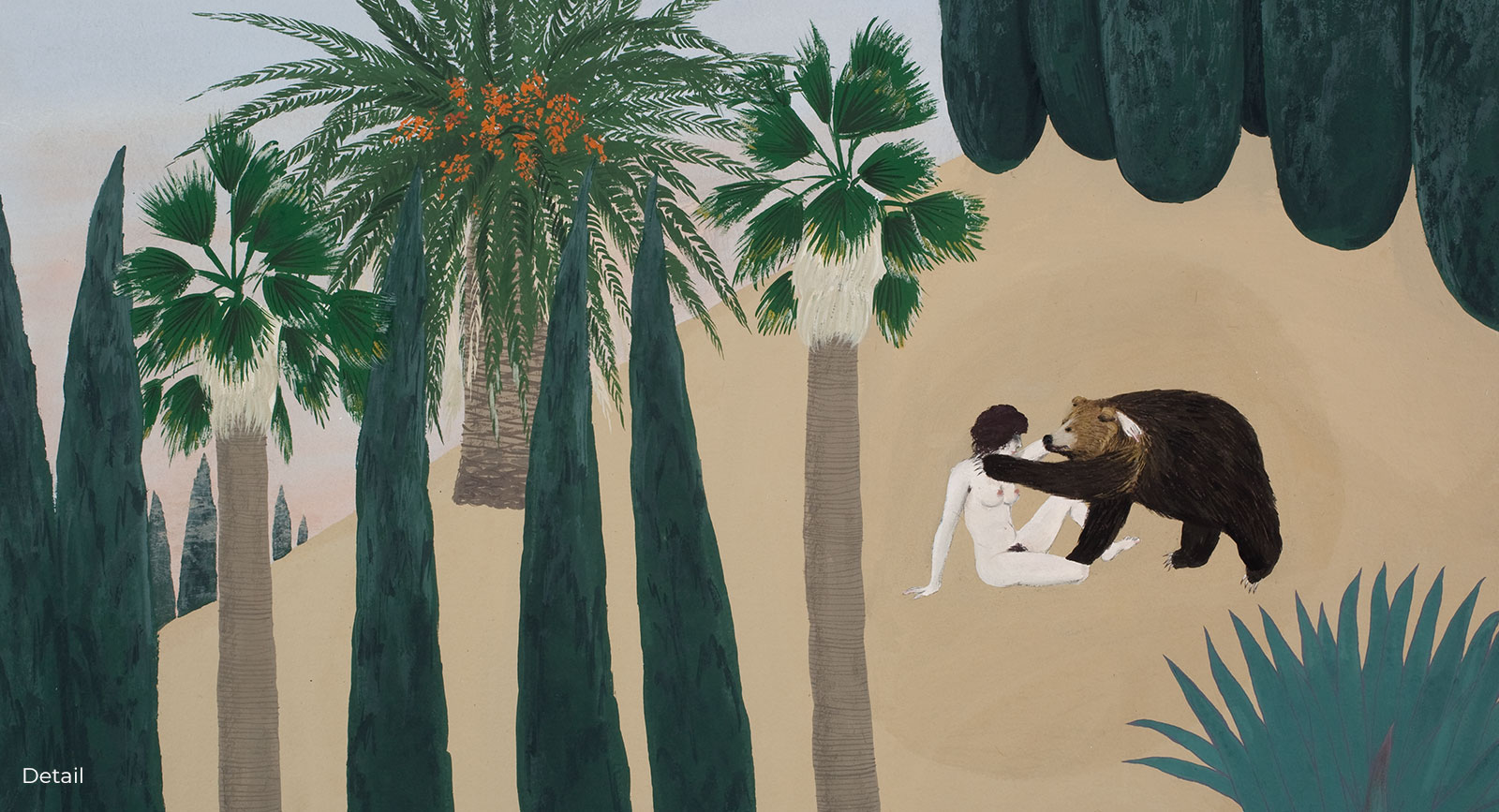 R.C. Baker wrote in The Village Voice about the works from which Schor’s Multiplo print was based, “[In her] powerfully composed gouache paintings from the early 1970s. Schor’s intense colors and bold designs perfectly complement her borderline-surreal narratives. In her Bear Triptych, a nude woman embraces/grapples with a brown bear — which seems to have lumbered directly off California’s state flag — their coupling amid the palm trees leaving them bloodied but alive. Continue reading.

“Who needs Henri Rousseau when there is Mira Schor? In her current exhibition at Lyles & King titled California Paintings: 1971-1973, Schor presents drawings and paintings that explore and redefine female wildness and the erotics of nature, produced during her time at CalArts in California. Originally from New York City, Schor belongs to a generation of artists that practiced feminist art long before it was established as a term.” Ksenia Soboleva, Hyperallergic.

Jerry Saltz writes about Schor’s works including Bear Triptych (Part I): “Artist-writer-activist Mira Schor’s work pulses with beauty, desire, and abstract narratives that drive into viewers with phosphorescent intelligence. Lesser known is her powerful proto-narrative story-art of the early ‘70s…that show an artist blasting out of the gate into her own imagine forests. Museum purchasing committees and curators, take notice.”

Andrea K. Scott in The New Yorker, “A collective portrait emerges of the artist as a young woman, creating the world in her own image. The pictures, with their abundance of succulents, moon phases, and spirit animals, can also feel almost uncannily current.”

In Mira Schor’s surreal works from the early 1970s…she appears as a kind of spectral action figure, often nude, finding her footing in a perilous and beautiful dream world. The young artist…rendered the symbols of her psychic landscape in velvety gouache, favoring dusky or night skies, the moon, wild animals, towering palms, and giant succulents with searching spikes. Dynamically composed but curiously still, as if frozen outside of time, these introspective narratives… are in possession of an unplaceable intensity, Continue reading.

“Breaking down binaries is of top concern these days, and she’s been doing it all along.” Continue reading.